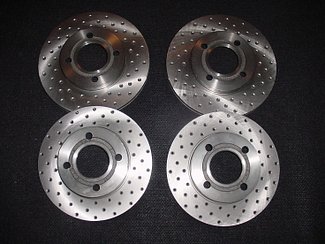 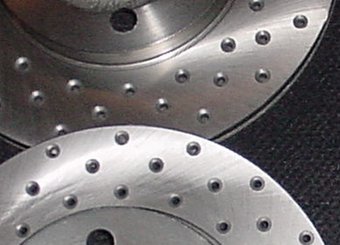 The B6/B7 S4 rotors are one of our specialties here at RotorLab. Done in our unique, one-of-a-kind "Arrowhead" pattern (patent pending), this pattern not only offers full-spectrum coverage, but is also directional and symmetrical from one side of the car to the other. The "arrowheads" point towards the front of the car at the top of the rotor when installed. This is a powerful and efficient brake setup....and by far our most popular, having sold over 30 sets of this particular car over the years.

In addition to just being a great upgrade to the factory B6/B7 S4 brakes, these can be used in conjunction with our 18Z calipers to upgrade your B6/B7 S4. They also can be used along with our 18Z calipers to upgrade  the B5 S4 and A4Q, as well as the B6 and B7-platform A4, and even Mk5 and Mk6 GTI and GLI, so long as you do the tab mounting modification. (See that section for details.)

As with all our rotors, these come with our proprietary ceramic-infused silver-oxide coating on the center hubs and outer rims.

The B7 A4 quattro brake system was available in 2 different configurations: the "HD" (heavy duty) setup and the "STD" (standard) brake system. Almost all of the 2.0 cars came with the smaller STD setup, but a few of the "sportline" A4Q's could be had with the HD setup. All the 3.2L cars in North America (sportline or not) came with the HD setup. (And yes, you CAN convert from the smaller STD to the larger HD setup---It's a matter of just calipers and rotors---it is a full bolt-on conversion. You can even convert your A4Q to the full B6/B7 S4 brakes....rotors and calipers, either OE or jump to the 18Z. At Rotorlab we can provide it all.)

Both setups had solid rears, and both lines are done in our unique, one-of-a-kind "Arrowhead" pattern (patent pending), offering excellent pad contact surface coverage which is directional and symmetrical from one side of the car to the other. The "arrowheads" point towards the front of the car at the top of the rotor when installed. The rears are also available in our "swirl" pattern above.

As with all our rotors, these come with our proprietary ceramic-infused silver-oxide coating on the center hubs and outer rims, for that 'uber-clean' look....clearly visible in these pics.

The B8-platform S4 and Audi S5 share essentially the same brake system, with 345mm fronts (same diameter as the B6/B7 setup) and slightly-larger 330mm vented rears. However, the B8-platform fronts have curved vanes, thereby necessitating different and more complicated patterns. Amazingly, VAG engineers only designed one rotor vane pattern for this platform---there is no "left and right"; as such,  both front rotors have the same unique inverted "bladehead" pattern (patent pending). The rears employ traditional straight vanes, so our unique rear pattern (patent pending) is symmetrical and directional from one side to the other.

As with all our rotors, these come with our proprietary ceramic-infused silver-oxide coating on the center hubs and outer rims, for that 'uber-clean' look. These particular blanks had a full coating from the manufacturer.

NOTE: we have a pattern for the B8-platform A5 and A4 as well, which use smaller 320mm front rotors---but we have no current pictures. Please contact us for details.

The B6 A4 Quattro  was available with two different brake systems, usually dependent upon the motor it came with. The 1.8T models usually came with the "STD" (standard) brake setup, which was comprised of 288mm vented fronts and 245mm solid rears; the other setup was the "HD" (heavy duty) brake setup, which was usually found on the 3.0L V6 cars. The HD setup came with 312mm vented fronts and 255mm solid rears. You need to know which setup your car came with; if youre not sure which system you have, your dealer can tell you by way of your VIN number. This is important because  a few rare 1.8T "sportline" models were ordered with the "HD" brake setup. And while the price difference between the 2 systems isn't "night and day", it isn't "5 bucks" either.

And yes, you can upgrade from the STD to the HD setup, or from either of those to the full B6/B7 S4 setup----it is simply a matter of calipers and rotors. It's a complete bolt-on jpob. Our A4Q rotors are available in standard 3-2-3 up front and 2-1-2 in the rear, or our unique directional/symmetrical "triple-double pattern" (patent pending) on the fronts and rears. The rears can also be done in our "swirl" pattern as seen in the above right picture.

And of course, these come coated with our proprietary ceramic-infused silver-oxide coating on the center hubs and outer rims.

Both Sedan and Avant

The B5 S4 was Audi's first major performance car brought to North America since the UrS6....and it came with a brake setup that was easily upgradeable. Our B5 S4 brake rotors are another one of our specialties here at RotorLab, having sold over 20 sets over the years. The front 321mm vented fronts are available in our unique "triple double" pattern, and the 256mm vented rears come in our "cleft dovetail" pattern; these were the first vented rears sold by VAG on our shores.

As with nearly all our patterns, these patterns offer full-spectrum coverage---and are unlike any other out on the market. They are also directional and symmetrical from one side of the car to the other. The "sweeps" point towards the front of the car at the top of the rotor when installed. This is a powerful and efficient brake setup, and very affordable.

As with all our rotors, these come with our proprietary ceramic-infused silver-oxide coating on the center hubs and outer rims, for that 'uber-clean' look, and long-lasting protection.

BIG NOTE HERE: We currently have patterns for most Audi platforms, from early 4000's and 5000's, all the way up to most of the variations within the B, C and D platforms. We have other patterns in development, however. We do them on an on-demand basis. Remember that we are not a retail shop! If you don't see your specific model here (such as a B3 Audi 90Q or Coupe Quattro, for example), remember that Audi uses many of the same brakes on different models. Email us and we'll get you a quote for your car, and present you with options for upgrades as well.

NOTE: we have rotors for the A4 non-Quattro as well, just not shown here. Please email us and we'll send you a quote.

The D2-platform A8 was Audi's first true major luxury car since the departure of the D1-platform "V8 Quattro" in 1992. The A8 model really started arriving here in 1997, although a few rare ones did get here in late 1996. The first iteration of the S8 arrived on US shores in the model-year 1998, and took the automotive world by storm, being immortalized in the cult-classic movie "Ronin"....setting the stage for Audis to begin making their mark on Hollywood. It's 360hp 40V V8 and Quattro AWD made her a formidable road warrior, earning the classic tagline "A wolf in a Brook's Brother's suit".

The car came with a decent braking system...the only issue is that between 1997 and 2002, quite a number of what were known as "gray market cars" also made it to our shores, both A8 and S8---these were cars that basically 'slipped in under the radar' of US customs and controls. It is believed by some that Audi was testing the waters for other variants. Some of these A8's and S8's had systems with Girling calipers, some with Ate calipers, and some with Lucas calipers------and in some cases, the SAME YEAR S8 had systems made by all 3. And all 3 systems had different offset and size of calipers. This makes it difficult to know exactly which setup a person's car came with....even when running the VIN at the dealership.

The only way to know which setup your S8 or A8 has is to look at the front and rear calipers to see which ones you have, and also measure the diameter of the rotors. We have done custom, one-shot patterns for 4 different A8s and S8's to date, and will gladly do more for you if you know which setup your car came with. One of the easiest ways to know is to see if there is a part number on the side of your rotors, such as an Ate, Brembo or OE part number, and we will simply match it up.

The pics you see above are from a 2001 S8 that had huge 375mm front rotors and 280mm vented rears....which were a first at the time. Send us an email and we will correspond with you to make a custom set for your D2.

The B5 A4 Quattro debuted in 1996....and moved Audi from being a quirky, German-enthusiast-only marquee into the mainstream of worldwide motors. With lines that are still fresh and current today (and copied by many other auto manufacturers),  it debuted a 1.8L 20-valve turbo engine that was years ahead of the rest of the world. It was also available with the same basic well-established 12-valve 2.8L V6 that had been powering the B4 models before it, and in '98 moved up to the better 30V V6. With Quattro AWD, the rest of the automotive world scrambled to catch up.

The A4Q was outiftted  several different brake systems; early models had 280mm vented fronts and 245mm solid rears; in early 1998 they jumped to 288mm fronts and 245 solids on the 1.8T and V6. When the wonderful 30V V6 debuted in late 1998, it came with either 288mm vented fronts       ( the "STD" system--standard) or in a new "HD" (heavy duty) system that had larger 312mm front rotors. The rears always remained the 245mm solid configuration. You need to know which configuration your A4Q came with...and this is for both sedans and Avants.

The RotorLab package of rotors for the B5 A4Q is available in both our unique symmetrical/directional "Arrowhead" pattern (patent pending) or a more conventional 3-2-3 front and 2-1-2 in the rear...your choice. Both patterns have excellent coverage, and come with our proprietary ceramic-infused silver-oxide coating on the center hubs and outer rims, for a clean look and superior rust and corrosion resistance. Please note that the pics above were taken prior to coating application.

The B2 platform was absolutely groundbreaking----starting with the now-legendary 1984 4000 Quattro. The car tore up the competition on the DTM curcuit, and further cemented Audi as the marque to follow. The 2nd-gen 4000Q (1985 thru 1987) rounded out the lines at bit, gave it a less-boxy  and more-contemporary look, and was more of a luxury sports sedan----with AWD, of course. The car came with somewhat-underpowered brakes for the 2.2L 5-pot engine (and the rare 1.8L 4-cylinder), with 256mm vented front rotors and 245mm solid rears.

The car can definitely benefit from a set of RotorLab crossdrilled rotors, which can be had in either a conventional 2-1-2 pattern (shown above) or can be requested in the newer, symmetrical/directional "Arrowhead" pattern (patent pending) as well.   Your choice. Both patterns have excellent contact-surface-area coverage, and come with our proprietary ceramic-infused silver-oxide coating on the center hubs and outer rims, for a clean look and superior rust and corrosion resistance. Please note that the pics above were taken prior to the coating application.

NOTE: we have rotors for the A4 non-Quattro as well, just not shown here. Please email us and we'll send you a quote.

NOTE: we have patterns for the A8 Quattro as well, just not shown here. Please email us and we'll send you a quote.